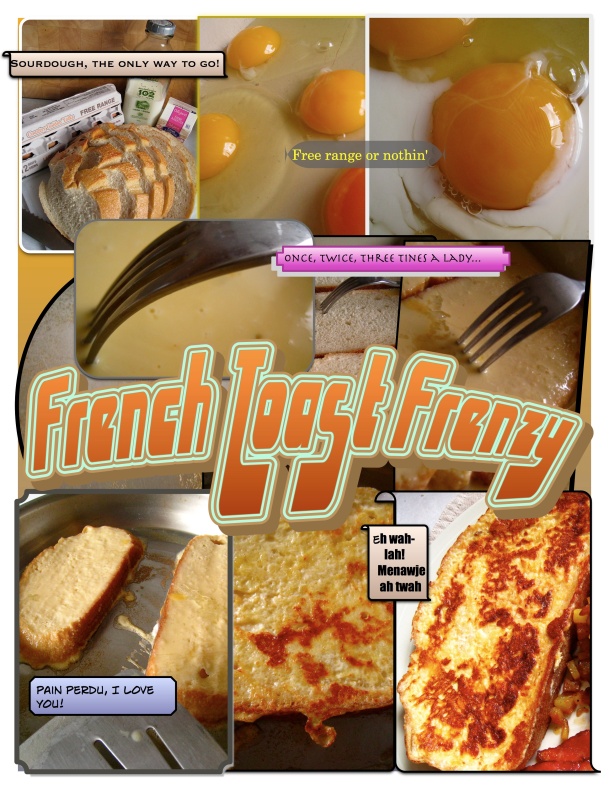 My darling Executive Chef husband was showing off some of the photos above to his restaurant team to taunt them with his weekend brunches at home. There is nothing like being woken up by the blissful smell of bacon goodness and heavenly hash browns, or so I’ve been told. I’m the one making the aromas come to life, cartoons blaring in the background.

Not to be immodest (since my modesty is one of my best qualities), but I make a pretty damn fine brunch. The last time I had a good brunch at a restaurant, I told the cook responsible that his hash browns were almost as good as mine. As he tried to compute the comment, Exec Chef helped him along by acknowledging that this was  highly complimentary.

While my brunch menu always has bacon and hash browns on it, the third partner is a rotating one. Waffles, pancakes and French Toast take their turns on the dance floor. When I had my sourdough starter, pancakes had priority on the rotation. But, lately the boys are asking for the French Toast. Can I blame them? No, I can’t. It’s pretty darn good.

The key is the bread. I will only use sourdough. I usually pick up a loaf from Save-On-Foods since I have yet to find a decent bakery nearby. I usually only use half a loaf for Frenchies, so I use the rest for croutons or freeze the remaining slices to use on another Sunday morning. My deep freeze is like a treasure chest, just colder and with less dubloons.

My preferred topping is the darkest maple syrup I can find. Once, I had a bottle of this amazing maple syrup that is aged in a former bourbon barrel. I tried to make it last, but it was too good to resist. Exec Chef, on the other hand has only salt and pepper on his, albeit only kosher salt and freshly ground pepper. Junior Chef has been known to create a snowscape with powdered sugar and then ask for maple syrup on top!

Posted in uncategorized. Bookmark the permalink.
← Garlic Bread Jamboree
Tea for Me →